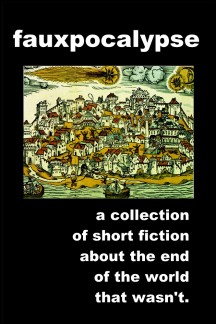 The end of the world has been cancelled. Have a nice day.

It’s the end of the world. Except it’s not.

Here’s the idea: on July 15th, the world was going to end. The comet Grijalva was headed straight for Earth and scientists were completely unanimous that it was going to hit, and then that would be it. Extinction Level Event.

But it didn’t happen. The comet turns out to be more ice than rock and it breaks up. There’s collateral damage, but it’s not the end of the world.

So everyone who thought the world was going to end now has to face the fact that it hasn’t?

Anyhow, this is a set of short stories from several different authors, each with their own take on the aftermath. Although…

Well, everyone’s got a pretty similar idea of what the end of the world would be like. Riots, looting, and debauchery in the cities, grim survivalists out in the country. So even though there’s a lot of different authors, these stories mostly deal with pretty similar scenarios.

Actually, the collection doesn’t outstay it’s welcome – the stories are well-written enough for them to carry you even when they’re a bit similar in scope. That said, obviously the digressions are the most interesting ones. Shoulders of Giants gives us the view from the International Space Station, and there was a great story at the end called Full Moon covering the 9-months-later implications of all that end-of-the-world sex.

Hah, I didn’t think of that.

No, me neither. It took me far longer than it should take a 31-year-old to work out precisely what was going on with all the women.

So the stories are all pretty good?

Yeah. Obviously as with any multi-author collection, some are better than others. And there’s definitely a couple where the authors focus too much on what’s happening without providing much in the way of a story – we see the panic and the riots but the characters we take the journey with have no depth. They watch the apocalypse but it doesn’t change them; they’re nothing but cyphers, and their stories feel more like snapshots. Distracting, maybe. Interesting? No.

Do many of them do that?

No, only a couple. And when Fauxpocalypse is good, it’s very good. Alice follows a troubled girl who welcomed the end finally coming to some kind of terms with her past trauma in the wake of the non-event. In Revelation, a student has an epiphany in the dawn streets of Oxford. In Thieves in the Night, Jason barely notices the comet’s passing because his own apocalypse happened in the weeks before. Each of these stories uses the non-apocalypse as a backdrop, but the main event is what’s happening to the characters, the world becoming a metaphor for what they’re personally going through.

It is. And a remarkably quick read, as well. There’s 12 stories in all, but I was surprised how fast I got through it.

Shiny. So worth a read?

I’d say so. Decent stories and supporting new writers. What’s not to love?