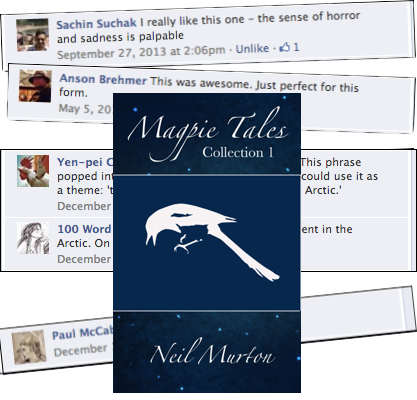 His sermons go unanswered
No-one listens, no-one can
Johnny always was a wolf
Who dreamed of being a man

The NeuroCinemaDrive, powered by the brainwaves of 100 telekinetics, was a great success, until someone put a copy of Big Brother 57 in a case marked Blackadder Season 1.

What should have been a speed of ‘something more interesting’s happening over there’ became ‘anywhere but here’, and now the starship was off the map.

“So where are we?” the Captain asked.

“I don’t know,” the Navigation Officer said. “The whole point of ‘anywhere but here’ being that ‘here’ is very small and ‘anywhere’ is very large.”

“Fine.” The Captain tapped the console. “Computer, display Netflix. We have work to do.”

END_OF_DOCUMENT_TOKEN_TO_BE_REPLACED

And so Frankenstein told the whole story. The Creature. How his elation turned to disgust when he saw the yellow eyes, the skin stretched tight over muscle and blood.

“So… you make life. You reanimate ze dead. You succeed vhere everyone but ze Almighty has failed… and you are complaining because it does not look like Scarlett Johannsen?”

Frankenstein threw down his cards and stormed out. Professor Vortechs looked at the vacant seat. “Do you think it knows ACOL?”

END_OF_DOCUMENT_TOKEN_TO_BE_REPLACED

The Yacht With Red Sails – NaNoWriMo #11

I first saw the yacht with red sails heading west, the day my father drowned.

He always was a keen boatman, though he’d been stolen by a riptide while trying to save Jess. The collie had swum too far out.

In his memory, I took up boating, and found why he loved it. Solitude, in a world of seven billion.

But solitude has a price. And now I pay it, dehydrated, sunburnt, my boat impaled on hidden rocks.

Coming from the east, I see the yacht with red sails. And I already know its captain, Jess sitting at his feet.

“You shouldn’t speak ill of the dead.”

“They’ve not complained yet.” Merlyn rapped her staff on a cypress. “Lucius Verus is buried here. Ruled the Old Empire for years, now feeds a tree.”

Arfa shivered. The island was warm, but her bones felt wrapped in fog.

Arfa thought. “Kings,” she said. “You’ve shown me kings. Whatever they did, they ended up here.”

“Merlyn… are you going to make me come back here?”

Merlyn stopped. “No,” she murmured. “Not for a long time.”

END_OF_DOCUMENT_TOKEN_TO_BE_REPLACED

It was Alex’s seventeenth visit to the Hall Of Memories, and the ticket-taker nodded a greeting as he went in.

Above each door, he read the lost memory inside. ‘That cute girl who smiled at you on the tube.’ ‘The ‘lion’ joke everyone laughed at.’

Good ones, of course. You remembered embarrassing stuff far longer.

That was why most people came here. To be reminded of things going well.

But not him. He was looking for a door crowned by just one word.

Sarah. When he saw that, he’d know she was finally gone. Then, he could stop coming back.

END_OF_DOCUMENT_TOKEN_TO_BE_REPLACED

“So…” Michael said, behind him, “what exactly is a duckbeezle?”

“About two letters different from what I said,” Gabriel snapped. “And seven levels of Gomorrah removed from what this thing deserves.”

“The universe. And it was fine. The planets spun, light moved, gravity did whatever damn fool thing gravity does. And now it’s just stopped.”

Michael peered into the void. “Yeah, you’ve got entropy. Happens to every universe after a while.”

The snow crunched under her boots as she crested the ridge. Up here was what she lived for – a sky clear as meltwater and air that rang like a bell.

She’d always aimed for the sky. When her friends climbed trees, she climbed higher. When others sunbathed, she scaled cliffs. Her workmates holidayed in Majorca, she went to the Alps.

And all her work, all her training, had led her here. The highest person for thousands of miles.

Above her, she saw the speck of an aeroplane, exhaust cutting a gash across the sky.

“Bastards,” she sighed, and climbed down.

For her final wish, Emily switched off irony, and thereby kicked away the social crutches from four million hipsters.

Unable to claim they liked things ironically, they were forced to admit that when they bounced around to Taylor Swift, it was due to a passionate love of girlie pop, not a comment on society’s overt commercialism.

And now they could be honest with each other about their feelings on the zeitgeist, they became happier than any generation has ever been.

Emily was somewhat dismayed, since she’d been hoping to troll an entire subculture.

“This place has always been divided,” my aunt said.

I was in Friedrichstrasse Station, come to help her research the old Stasi archives for a book.

“You think?” She gestured with her stick. “Look. No cameras. Because we remember who put cameras here.”

“The wall came down years ago.”

“No it didn’t.” She sat down. Seemed older, somehow. “In the archives, I found reports. My handwriting. Information I sent them. I don’t remember that. But they’re there. I collaborated, and I don’t… won’t remember.” She shook her head. “Some walls never come down.”

This story was inspired by Christa Wolf, who really did find out, several years later, that she’d been a Stasi informer.

And you can find out more about that here.